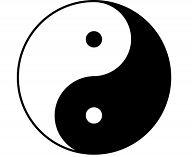 Yin and yang, Chinese 陰陽 yīnyáng, „bright and shadow side of a mountain“: The traditional Chinese worldview, especially the Daosism, starts from the premise of a dual principle of nature.

Everything in the world is either attributed to yin or yang or a mixture of both.

To experience the world it is necessary to have its opposit, e. g. to perceive brightness, we need the shadow and so on.

Yin and yang don’t stand next to each other unalterable, but change cyclically.

This principle is also applicable to the seasons: in winter there is the greatest yin which fills up with more and more yang in spring until it reaches its peak in summer and gets more yin in autumn and so on.

The taiji (太極 tàijí) – the sign of yin and yang – stands for a dynamic equilibrium between both forces which is the highest goal in the Daoist teaching and Chinese metaphysics.

The small spots in the image means that one Aspekt never disappears completely, because otherwise ther would be no movement possible any more.

Yin and Yang
Tagged on: taiji    yin and yang