Trigrams, Chinese 八卦 bā guà,  “eight trigrams”: a trigram is symbol consisting of three lines. The individual lines are either full (yang __) or broken (yin _ _), therefore there are eight combination options forming the basis of the Yijing (易經 yìjīng).

It is said that the eight trigrams were invented by the Chinese Great Emperor Fu Xi which supposedly lived in the 3rd or 4th millennium B. C.

The top line represents the heaven, the middle line the man and the bottom line the earth.

The He Tu and the Early Heaven Ba Gua

The arrangement of the trigrams in the Early Heaven is based on the He Tu (“river map”) which was according to a legend derived from a special pattern on the back of a dragon headed horse seen at the Yellow River. 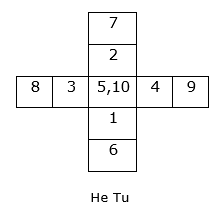 Over time, compass directions had been assigned to the He Tu model:

Reportedly, Fu Xi had combined the He Tu with the trigrams and so construed the so called Early Heaven bagua showing the ideal state of the universe: all opposing trigrams are balancing out perfectly, for example the absolute yang by Qian in the South and the absolute yin in the North by the trigram Kun etc. 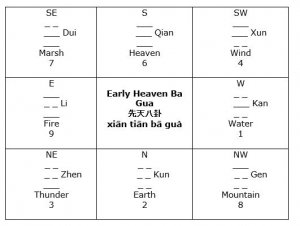 The Luoshu and the Later Heaven Bagua

At the time of the legendary emperor Xia Yu (2123–2025 B C.) a tortoise is said to alight from the river Luo having a pattern of dots in a certain arrangement on its shell. From this the magic Luoshu square has been derived and was combined with the associations of the He Tu: 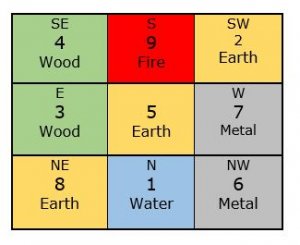 King Wen (1112–1050 B. C.) is said to have combined the bagua model with the Luo Shu resulting in the so called Later Heaven Ba Gua (Hou Tian Ba Gua). This shows the state of imperfection in the universe with its changes in the flow of energy. 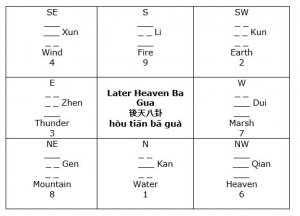